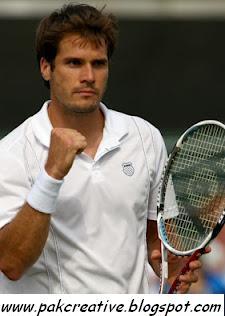 Former World No. 2 Tommy Haas won the Gerry Weber Open title for the second time on Sunday in Halle as he defeated good friend and five-time former champion Roger Federer 7-6(5), 6-4.

“I don’t have many words to say really, except that it is an amazing feeling to win another title in Germany,” said Haas. “[Winning] my thirteenth title was a goal of mine to maybe achieve in the next coming months, years or however long I am going to play. To have somebody across the net like Roger is a real honour for me. To have that picture with the winning trophy and Roger next to me is something really special, something I’ll obviously never forget. I’m just really happy and proud.”
The German had lifted the trophy in 2009 with victory over Novak Djokovic and ended a nine-match losing streak against Federer to win his 13th ATP World Tour title. He has won eight ATP World Tour finals in a row, with his last defeat in a title match coming against Andre Agassi in Rome in 2002.