It took England 28 years to win a test series in India under the captaincy of Alistair Cook. The visitors did that convincingly winning 2-1, with the final test ending in a draw. The brilliant batting display from Jonathan Trott and Ian Bell ensured that the visitors do not lose any more wickets and the match ends in a draw. Both had a stand of 208 runs with both scoring centuries. 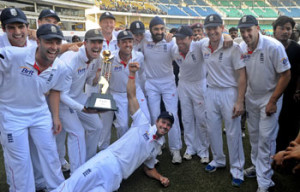 The first innings score of both the teams was almost even. In the second innings, England lost her 3 wickets early on in the final day of the test. Then there was a brilliant partnership featuring Jonathan Trott and Ian Bell which saved the day for the visitors. Trott scored his eighth century and first in nine month. He was however, supporting the team by chipping in precious runs in almost all the tests. For Bell, it was his first test hundred in India and had to wait more than a year for that.

Both the players had a difficulty job to do early on which they did expertly and developed a much needed partnership to ensure that the draw is confirmed. The pair was just 7 runs short of breaking the record of highest 4th wicket partnership for England in India held by Andrew Strauss and Paul Collingwood in Chennai in 2008 when he was caught out at slip off Ashwin. Bell who was not out in the innings at 116 also displayed true character as he came in at 94 for 3. He was however lucky as Sehwag dropped his catch at slip when he was 75 and at 97, a direct hit could have run him out. No wickets fell for England and it was a frustrating moment for India and a happy one for England. The final score was: