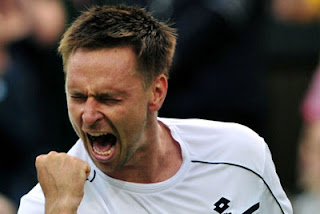 Former world number four Robin Soderling of Sweden who was runner up in the Roland Garros in 2009 and 2010 has expressed serious concerns over his future in tennis. The swede is out of the pro tennis circuit since 2011 due to mononucleosis or glandular fever. He is still battling his illness and that is the reason of his uncertainty in tennis.
The disease takes a lot of toll on the person suffering from it. The ability to focus diminishes, at one moment the person feels high and energetic but in the next moment, may be due to physical activity, an element of fatigue and hopelessness occurs. The person feels demotivated and same are the feeling Soderling is going through.
Soderling admitted that he had been trying hard to come back to the tennis circuit and felt that he would be there in a couple of month, however, that had not been the case as he felt fatigued, unwell and jaded again. He is now 28 and has not played for a year and a half. Time is running from him and his motivation to return to the professional arena is fading. Soderling said that he was not as desperate to come back as six or eight months ago. Although he pledged to give a try to make a comeback, but expressed that he would accept if that was not possible.
The only good thing for Soderling in these tough times is that he has recently became a father after his long-term partner Jenni Mostrom gave birth to their daughter Olivia.
Despite the entire lean patch in his career, Soderling was optimistic that he had at least 5 more years in him to spend on court.