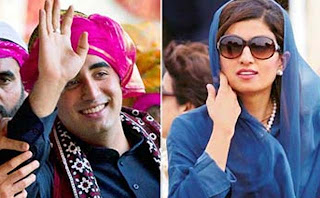 Internet across the globe has gone viral over the rumors about the love affair between Pakistan Foreign Minister Hina Rabbani Khar and Pakistan People’s Party chairman Bilawal Bhutto.
Expectedly, it has become juicy stuff in the political circles of Pakistan.
According to revelations made by a Bangladesh weekly, the 35-year old Hina Rabbani Khar and Bilawal, younger to her by 11 years “plan to marry and settle down in Switzerland.”
President Asif Ali Zardari, father of Bilawal is completely opposed to their affair, said the sensational Blitz. And that it was he who “ caught them red-handed when they were in a compromising position in his presidential palace.”
The weekly also talks of a possible divorce between  Hina Rabbani Khar  and her businessman husband Firoze Gulzar. The affair, it says, has prompted Gulzar to seek her phone call details from the authorities. The brainy and beautiful  Hina Rabbani Khar , who stole the thunder when she addressed a joint press conference along with her Indian counterpart S M Krishna in Islamabad recently, is mother to two daughters. Bilawal is unmarried.
Hina Rabbani Khar, currently in USA along with Zardari who on Wednesday addressed the United Nations General Assembly, has not reacted to the scandalous reports. Zardari’s worry, the weekly said, is that the scandal would not only finish his son’s political career but also sound the death-knell for the ruling Pakistan People’s Party, founded by Bilawal’s grandfather, the late Zulfiqar Ali Bhutto.
However, the mainstream media, including newspapers, refused to buy the story or played cautiously as they did not pick up the startling report.