Rooney in against QPR

Rooney in against QPR 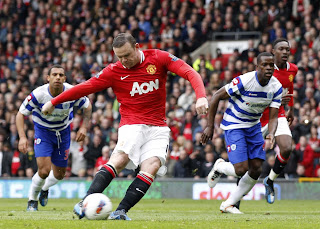 Sir Alex Ferguson, the Man Utd manager tries to put the defeat against Galatasaray behind and to get back to winning form. The red devils will be playing against QPR on saturday which is not having any manager right now after firing Mark Hughes early on Friday morning. QPR is currently having only four points and is at the bottom of points table.
Both Wayne Rooney and Chris Smalling, who didnt play in the last game are likely to play. In fact, Rooney didnt play the past two games due to tonsillitis but did take part in training sessions the whole week. Smalling missed the game due to shoulder problem. However, Nani will not be available as he is unfit due to hamstring injury.
Six Alex told that the team is focused on win again after a disppointing loss last week. He also expressed his surprise on QPR’s decision to bring in 11 new players and still unable to make an impact in BPL, although to be at top of the league immediately was also something he didnt expect.
QPR would be temporarily managed by Mark Bowen and Eddie Niedzwiecki for the trip to Manchester.