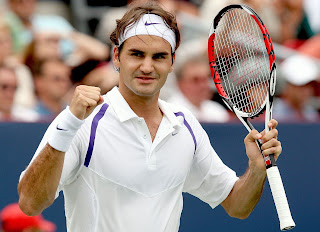 Roger Federer (World No. 3) stormed to the Gerry Weber Open final for the seventh time on Saturday in Halle as he dismissed Mikhail Youzhny 6-1, 6-4 in one hour. The Basel native fired eight aces and converted four of his eight break points to seal his 13th win in 13 meetings with the No. 31-ranked Youzhny.
“It was a good match for me,” said Federer. “An early start, but I think I started well. Mikhail started a bit slow, but I think I took advantage of it and after that I was able to get on a roll. I’m obviously excited to be a finalist here again.”
The Swiss is bidding to win the title at this ATP World Tour 250 grass-court tournament for the sixth time after victories in 2003-2006 and 2008. He has a 39-4 event record, with his only final defeat coming in 2010 against Lleyton Hewitt.