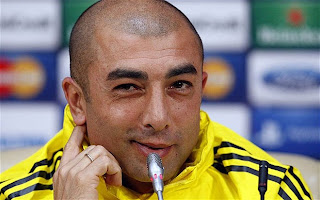 Chelsea coach has hinted for a change of plan against Juventus and may play more defensive team in Turin, while Manchester United set to rotate in Turkey
With a victory against Juventus, Chelsea will have a place in the knockout stages of UEFA champions league. After a 2-1 defeat by West Bromwich Albion in the Barclays Premier League on Saturday, Roberto Di Matteo said that he may change the formation to bring more defensive solidity to a team who are looking to avoid becoming the first reigning champions to fail to qualify for the knockout stage.
“Maybe it is the time when we might have to change in terms of our selection and the way we play, looking at the set-up of the team and to be going a bit more defensive,” Di Matteo said. “We had a lot of joy with the way we have been playing and long-term that is the way we want to go but we need a couple of positive results to get our confidence high again.
Chelsea does not enjoy a good record in Italy as the club had only one victory in eight attempts – a 4-0 group victory over Lazio in 2003, when Frank Lampard scored the final goal. The other seven matches resulted in four losses and three draws. Chelsea were held 2-2 by Juventus in the reverse tie at Stamford Bridge having gone 2-0 up.
“They are two massive games coming up and we’ve got players with a lot of experience to earn wins in those games.” said Di Matteo. We’ve been in this position before but, for some reason, November for our club is a bad month and it seems to again be the case this year. We have to try and address that.”
The other match to be played in Group E is between Nordsjælland and Shakhtar Donetsk.
With Manchester United already qualified for last 16 stage of UEFA champions league, courtesy of their four successive wins in Group H, Sir Alex Ferguson has the freedom to rotate his squad and let players who featured in the shock Barclays Premier League defeat by Norwich City to rest for Saturday’s match with Queens Park Rangers at Old Trafford. One of the players to feature in Istanbul may be Darren Fletcher. The Manchester United manager has been lifted by the return to training of two players who missed the Carrow Road defeat. Wayne Rooney, who had tonsillitis and goalkeeper David de Gea, who had his wisdom teeth removed. Both players trained with United in preparation for the trip to Istanbul, although they may not fly out.”We have done the first part. The second one is when we get the really big European nights”
Michael Carrick, who scored the only goal against Galatasaray in the opening group fixture, is already looking to the knockout stages of the competition where United have reached three finals, a semi-final and a quarter-final on the past five occasions they have progressed beyond the group phase.
“That is the big test,” said Michael Carrick. “That is when the competition really comes alive. We have done the first part. The second one is when we get the really big European nights and we go away to the best places in Europe and win games.