Rafael Nadal (Two-time reigning champion) made Roland Garros history on Monday, defeating top-ranked Novak Djokovic 6-4, 6-3, 2-6, 7-5 in final that spanned two days to capture his seventh title. Breaking a tie with Bjorn Borg for the most trophies in tournament history. 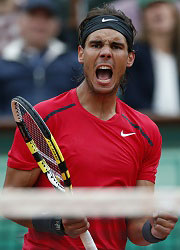 “For me it is a real honour. Borg is one of the greatest in history, one of the more charismatic players in history,” Nadal said in a post-match interview with John McEnroe. “The comparison with the great Bjorn is fantastic. He’s always been very nice to me, so I have to say thanks.”
Added Nadal in his press conference, “For me, it is a real emotional day, winning another time here. Sure, the seventh is important because I am the player who has more today, but like I said yesterday: that’s after. For me, the important thing is to win Roland Garros even if it’s the first, second, third, or seventh [time]. That’s what makes me very happy. [I’m] very happy [with] the way that I played today, because I played much more aggressive.”

With his 11th Grand Slam crown, Nadal moves into a third-place tie with Borg for the most major singles championships in the Open Era. He also becomes just the 10th player in Open Era history to win 50 titles on the ATP World Tour, with 36 of his successes occurring on clay