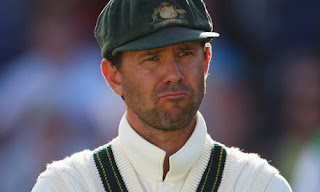 Ricky Ponting has scored just 20 runs in three innings this series, leaving his Indian summer of 2011-12 to recede ever further into the distance. He might have only one more Test to prove his position in the Australian team to be selected for 2013 Ashes. Same is the case for Rob Quiney whose brief career appears to be over. Both the batsmen failed to score at the batting crease late on day three of the second Test in Adelaide. Ponting scored only 16 runs in second innings.
If Ponting and Quiney do not perform in the next text, the selectors may decide to look towards more youthful options for the three Tests against Sri Lanka and lter for the test series against India and the Ashes against England. The options available to them are Usman Khawaja and Phillip Hughes. Khawaja has scored an outstanding century for Queensland earlier this month, while Phillip Hughes chose Saturday to make his first Sheffield Shield century for South Australia, an unbeaten innings at the MCG against Victoria. Quiney who was the replacement for injured Shane Watson may soon be out as the later has been declared fit to play at the WACA ground.