When Argentina and Barcelona striker Lionel Messi scored twice against Real Betis to break Gerd Mueller’s record of 85 goals in a calendar year, Mueller was the first one to congratulate him. He has hailed Lionel Messi as an incredible player and was happy that the world’s best player has broken his record. Mueller had scored 85 goals in 60 matches in year 1972 when playing for Bayern Munich and West Germany. His record for most goals in a calendar year stood for 40 years. Messi now has 86 goals in 67 games.
Mueller was generous in applauding Messi and hoped that he would further add to his tally while playing in the remaining 3 games of the year 2012 so that the record might then stay for 40 more years. Mueller wished if Messi were there in Bayern Munich.
Besides breaking Mueller’s record, Messi’s two goals against Betis made him the top goal scorer in Barcelona in league games. The previous leading goal scorer was Cesar Rodriguez who scored 192 goals. Messi has now scored 194 league goals for Barcelona. He is already Barca’s record goal scorer after breaking record of 232 goals which was also set by Rodriguez during the 1940s and 50s. 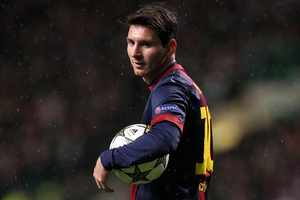 Messi’s team-mates were also all praise for him and expressed him as supernatural, beyond limits. His contributions for the club would always be remembered. Barca sporting director Andoni Zubizarreta expressed that the records made by Messi were coming so fluently and quickly that they would be appreciated in due course of time as they seem so effortless and simple.
Messi was humble and modest when asked about the record and said that the victory for the club was more delightful event than the personal glory. However, he pledged scoring more goals to make it difficult for the next player who tries to break this record.