McIlroy named Player of the Year

McIlroy named Player of the Year

World number one Rory McIlroy from Northern Ireland has been named PGA Player of the Year, 2012. He had a very outstanding season in which he won four US PGA titles. Since Tiger Woods won the prestigious award in 1998 as the youngest player, Rory has become the youngest player to win Jack Nicklaus Award since. He is 23 year old only. 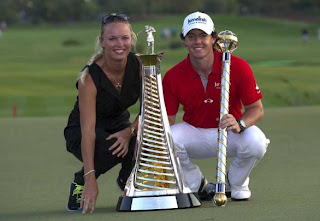 McIlroy was expected to win the award as he had quite a few achievements this year. He won US PGA Championship by a record eight strokes, a record held earlier by Jack Nicklaus when he won 1980 US PGA Championship by seven shots. He also won Deutsche Bank Championship, Honda Classic and BMW Championship and the Vardon Trophy for the lowest scoring average. Voting for the award is done by a panel of selected tour players that included Jason Dufner, Brandt Snedeker, Bubba Watson and Woods.
McIlroy has also won the most money for the US PGA and European Tours. US PGA Tour Commissioner Tim Finchem said that McIlroy was the obvious choice for the award. McIlroy was happy and satisfied to end a successful and so far the best season of his career on a high note. He said that getting applause and recognition from colleagues was a nice feeling.
John Huh won the rookie of the year award as he became the youngest player in almost a decade to qualify for the Tour Championship. Previous youngest player to qualify was Sergio Garcia.