Skip to content
Manchester United came from behind to win 3-1 and avoided what could have been a possile upset at the hands of Queens Park Rangers, although they were with one goal deficit. This is QPR worst start of the season. 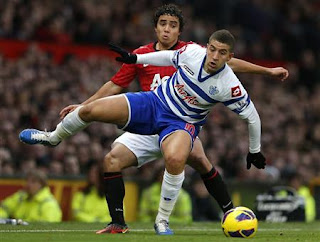 It was QPR which took the lead in the second half as Jamie Mackie scored. They had a sense of purpose and performed their defensive duties with diligence. However the lead couldnt last long as Sir Alex Ferguson took immediate changes, hauling off Paul Scholes and Ashley Young in favour of Anderson and Hernandez. The change paid dividends and the red devils scored three goals within a span of nine minutes. Initially, Jonny Evans scored the equalizer from Welbeck’s header from corner kick by Rooney. Later Darren Fletcher found the perfect spot between the two QPR defenders to head the ball into the goal and open his account in Premier League in 1 year. Javier Hernandez scored the third goal of the evening to take Manchester United to the top of the points table.
Redknapp couldnt see the team lose and left the field four minutes before the match was over.