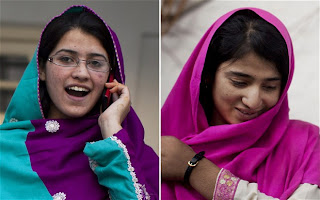 A gunman attacked Yousufzai, who campaigned for girls’ education despite threats from the Taliban, on October 9 as she was leaving school in Pakistan’s Swat valley. She was wounded in the head and her two school friends were also wounded.
The shooting provoked widespread outrage and brought Yousufzai, who is recovering in a British hospital, international admiration for her campaigning.
On Thursday, police escorted her teenaged classmates, Kainat Riaz and Shazia Ramazan, back to school.
“I am very excited to resume my studies once again in the school, but I will definitely miss Malala,” Kainat, who was shot in the arm, told Reuters.
The two girls will have security escorts indefinitely, police said.
The attack on Malala, 15, followed years of campaigning that had pitted the girl against one of Pakistan’s most ruthless Taliban commanders, known as Maulana Fazlullah.
Fazlullah and his men took over the Swat Valley and blew up girls’ schools and publicly executed those they deemed immoral or tried to stand up to them. Eventually, the army launched an offensive to drive the militants out.
Though Fazlullah and his men have fled over the mountains, Swat remains tense and it seems inconceivable that Malala, who has become a symbol of resistance to Taliban efforts to deny women education, will be able to go home and back to school.
Her father has said in late October she would “rise again” to pursue her dreams after medical treatment.
Tens of thousands of Britons have called on the government to nominate Yousufzai for a Nobel Peace Prize for her activism.
Pakistan has 5 million children out of school, a number only surpassed by Nigeria, the U.N. cultural agency said in a report published this week. Two-thirds of those children are girls.