Skip to content
Barcelona striker Lionel Messi of Argentina scored twice against Levante to give his side a 4-0 win and extend the lead on points table in La Liga. With these two goals, the striker is just 3 goals shy of matching all time goals record in a calendar year set by German footballer Gerd Mueller who also played for Bayern Munich. He scored 85 goals in 1972. 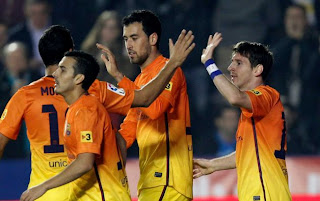 The win has given Barcelona 11 points lead over their arch rivals Real Madrid which lost its match against Real Betis a day before. Out of the 13 matches played so far, Barcelona has drawn one match and has won 12. This equals the best season start by a team in la Liga previously set by Real Madrid in 1991-1992 season.
It was Andres Iniesta who was the key player in all the goals. He scored one goal and assisted in three goals. Lionel Messi scored in 47th and 52nd minutes from brilliant passes from Iniesta to take his tally of goals to 82 in 2012. In the 63rd minute, he helped Cesc Fabergas to score another goal. Iniesta made some penetrations in the opponents half early on in the first half as well, however solid defending by Levante prevented from scoring the goal and the match was an even affair till the half time.
Levante got a chance to score a goal when they got a penalty just three minutes before the full time. However, Barcelona goalkeeper Victor Valdes saved the penalty kick by Jose Barkero brilliantly.