(Reuters) – Lawyers representing the family of Chinese Premier Wen Jiabao have rejected claims made by the New York Times on Friday that they have accumulated at least $2.7 billion in “hidden riches”, Hong Kong media reported on Sunday. 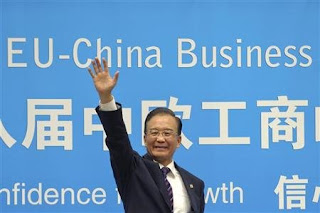 The New York Times, citing corporate and regulatory records, reported on Friday that Wen’s mother, siblings and children had amassed the majority of their wealth since Wen was named Vice Premier in 1998.
In a statement issued late on Saturday and carried by Hong Kong television as well as the South China Morning Post and Sing Tao Daily newspapers, Bai Tao of the Junhe Law Office and Wang Weidong of the Grandall Law Firm said the wealth “does not exist”.
They also denied that Wen had acted improperly or engaged in business activities himself, and said his relatives had not profited in any way from his tenure as premier and had no influence on Wen’s “formulation and execution of policies”.
The statement said Wen’s mother had never received any income or property apart from her salary and pension.
Telephone calls made to the law firms by Reuters were not answered.
The Times’ report said the names of family members “have been hidden behind layers of partnerships and investment vehicles involving friends, work colleagues and business partners”.
It said his family’s holdings include a Beijing villa development project, a tire factory in northern China, a company involved in building some of the venues for Beijing’s 2008 Olympics including the “Bird’s Nest” main stadium, and Ping An Insurance, one of the world’s largest financial services companies.
The New York Times report came at a sensitive time for Beijing, with China about to undergo a once-in-a-decade change of leadership in which Wen will step down as premier.
The newspaper’s websites in English and Chinese were immediately blocked in China, and searches for the New York Times as well as the names of Wen’s children and wife were blocked on China’s main Twitter-like microblog service.
Foreign Ministry spokesman Hong Lei told a daily briefing on Friday that the report “smears China’s name and has ulterior motives”.source (reuters)