Skip to content
It was a nail biting match between Los Angeles Lakers and Indiana Pacers in which the winner was decided in the very last second. The score line tells it all, Pacers winning by 79 to 77. It was just a basket difference between the two teams. Indiana guard George Hill was the player of the day whose basket seized the win for Pacers. 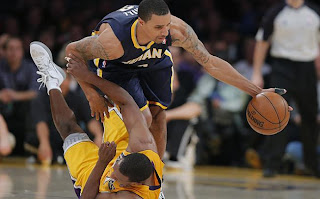 For most of the time in the match, Lakers were trailing and tried to match the score line. However, it seemed as if they would come from behind to win the match when Kobe Bryant shot a three pointer to level the score at 77-77 with just 24 second remaining in the full time. However, the next attack by Pacers saw guard George Hill do lay up with the ball dropping through the basket in the last second and that proved to be a match winning basket. Pacers head coach Frank Vogel was very ecstatic and said that he had faith that Hill’s shot would prove to be a match winner. In total, Hill scored 19 points for Pacers.
LA Lakers would have won the match but an uncharacteristic 20 free shots miss proved too costly for them. Kobe Bryant was the key player for Lakers who scored 40 points, although he missed over 10 free shots. Overall it was a high quality match. Both the teams are now 7-8 in this season.