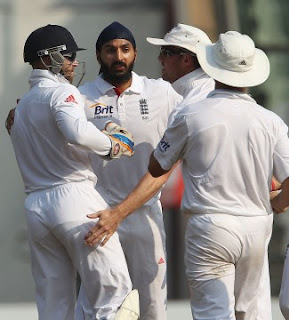 Chasing a target of 57 runs, England breezed to a ten-wicket victory on the fourth day of the Mumbai Test and levelled the 4 test match series to 1-1. The match was a contest between slow bowlers of both the teams in which the English spin attack outplayed their Indian counterparts. Monty Panesar and Graeme Swann took 19 wickets in the match. Panesar’s match return was 11 for 210, Swann 8 for 113.England achieved their target in 9.4 overs.
On the fourth day, India’s lead was 31 with three wickets remaining. Gautam Gambhir, who had batted throughout the previous evening, made his unbeaten 53 to 65 but he was last out when Swann had him lbw. However he made minimum efforts to keep strike and protect India’s tail  walked off shaking his head that umpire Tony Hill had missed an inside edge. The other two batsmen were out by Panesar and Swann. Other than Gambhir, no Indian batsman was able to put up a fight and score decent runs.