Huawei following the foot step of Samsung is believed to be working on better and larger size displays for its upcoming smartphone.Samsung recently upgraded the display size of its Samsung Galaxy Note devices. As compared to original Galaxy note the new Galaxy Note II is equipped with a larger display. It seems that Samsung will continue to increase the display size of the upcoming smartphones. 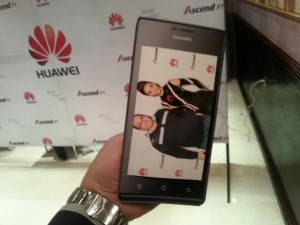 Huawei is rumored to enter the smartphone market with a launch of larger 8.5 inch smartphone. Huawei has still not confirmed about any such device but in a recent tweet by Eldar Murtazin he mentioned that he got a chance to of hands on one of Huwaei device in a recent Huawei event. He also displayed picture of the said Huwaei smartphone.
The main thing which comes to mind is that why Huwaei wants to design and launch such a smartphone with much larger display. The answer may be simply to compete in the smartphone market with another device or better called it a tablet.