Google Inc (NASDAQ:GOOG) on Monday unveiled its latest gadget Google’s Nexus smartphone and a new and larger version of  7-inch Nexus tablet. It also increased the storage of the $199 version of the device to 16GB from 8GB. The earlier version of Nexus 7 was launched in July this year. The bigger Nexus tablet version carries the flagship of Samsung and comes with a display screen that measures about 10 inches diagonally. It is about the same size as the Apple’s iPad. 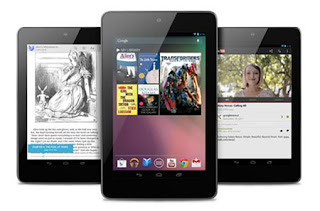 Google also unveiled a new Nexus 4 smartphone, that features a quad-core processor and a 4.7-inch and being manufactured by LG and carries updated Android operating system Key Lime Pie that now operates on over 500 million devices. Key lime pie has replaced Jelly bean version of Androids.
The overabundance of phones and tablets is hitting the market and shaking up the technology business. Users are shifting from laptop and desktop computers to Mobiles and tablets.  Google’s Nexus is competing other gadgets in the market launched by Amazon, Apple, Microsoft and Samsung.