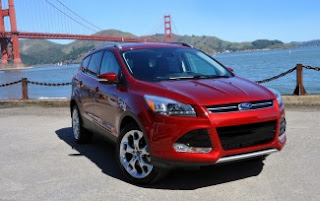 Ford motor Co. is recalling its Escape and Fusion cars to fix engine overheating problems. On several complaints by users about engine heating up which may catch fire Ford is recalling about 73,320 Escape and 15,833 Fusion cars. Overall this is third time Ford is recalling Escapes. All the cars that are recalled were built and sold only in the Canada and U.S.
Fusion and Escape are among Ford’s top selling cars. According to Autodata Corp, in 2012 the Dearborn, Mich, automaker has sold nearly 220,000 Escapes and 207,000 Fusions.
Both vehicles seat five. The 2013 Escape has a starting price of $22,470, while the Fusion starts at $21,700
Drivers in past have been complaining that their Escape and Fusion gauges often display warning messages that includes “Engine over temp’ and “Engine Power Reduced to Lower Temps”.  Some other drivers complained their cars red warning lights illuminate most often.
All recalls involves only Ford’s 2013 models, equipped with a 1.6 liter, four cylinder engine.
Earlier a month after the Escape’s launch in July it recalled about 11,500 models to fix crack-prone fuel lines. Later in September Ford recalled 7,600 Escapes to fix coolant