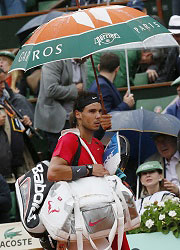 The Roland Garros final between Rafael Nadal  and Novak Djokovic   was postponed on Sunday when rain halted play in the fourth set. The final will resume on Monday at 1pm CEST/7am EST, with Djokovic serving at 4-6, 3-6, 6-2, 2-1.
Rain first stopped play in the second set with Nadal leading 6-4, 5-3. After returning from a 34-minute delay, Nadal broke to take the second set, and had an opportunity to control the match in the third set before Djokovic staged his comeback trailing two sets and a break. Down 0-2, the Serbian won eight consecutive games to reverse the momentum before play was suspended for the second time.
For Nadal, it was just the third time in 53 Roland Garros matches that he had won two or fewer games in a set (’09 4th rd. vs. Robin Soderling and ’06 final vs. Roger Federer). It was also the first time he dropped a set at the tournament since winning a five-set match against John Isner in a first-round encounter last year.