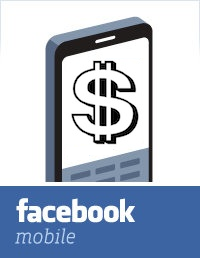 Facebook Inc users accessing the service from mobile devices has rapidly increased over the few months.. Facebook crossed the 1 billion threshold for monthly active users worldwide last month. Mobile Ad campaign which represents at least 14% of Facebook Inc (NASDAQ:FB) revenues has shown positive trends during recent quarter of the year. It is expected that If Facebook Inc (NASDAQ:FB)’s ad exchange (FBX) follows the same trend, the social networking giant should be growing its business in the segment by 16% next year, while in 2014, it should experience at least a 20% growth rate in its new venture.
The social media company has introduced various monetization mechanisms to further boost its traffic and increase return via  Facebook Gift Service, Facebook Ad Exchange (FBX).
Facebook ads on mobiles accounted for $153 million in revenue, or 14% of all advertising revenue. Facebook executives said they stepped up third-quarter investments in tools to target users on mobile devices in an effort to reinvent the company as a “mobile first” operation. Facebook, following other companies, is rushing to follow users as they migrate from the desktop to smartphones and tablets. Today nearly half of Americans own a smartphone. Six of 10 monthly active users are logging in Facebook from mobile devices. That’s an increase of 61% from a year earlier. For the US and Canada average revenue per user (ARPU) was up from $3.20 to $3.40 this quarter. And while the “rest of world” region got a slightly larger percentage increase from $0.44 to $0.47.
Although the number of Facebook users via mobile devices have increased  however the earnings are coming gradully because mobile ads are less expensive than the desktop ads, and the advertisers and clients are not willing to pay more than a certain amount for the mobile ad displays. Therefore,switching to high number of mobile users may create certain revenue problems for Facebook in the future.
As compared to Facebook, Google Inc. and Microsoft Corp have reported disappointing earnings last week from ads on mobile devices.