Skip to content
Tony Romo was brilliant Sunday night in the Dallas Cowboys’ victory over the Philadelphia Eagles. But every quarterback who plays the Eagles these days is basically a mix of Tom Brady, Johnny Unitas and Flash Gordon, and anyway Romo’s been good for a while now. He has 10 touchdown passes and two interceptions in his last five games, and the Cowboys have gone 3-2 in that stretch to keep kicking around on the fringe of the NFC playoff race.
ith DeMarco Murray in the backfield, these Cowboys are a different team, and Sunday’s win against Philly helped prove that. 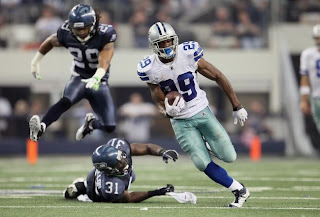 What was different about the Cowboys’ offense on Sunday was the running back. And if you were still of the opinion that the Cowboys’ running game could be the same with Felix Jones as it is with DeMarco Murray, this game had to have cured you. In his first game back since he sprained his foot in a Week 5 loss in Baltimore, Murray ran for 83 yards and a touchdown on 23 carries. Spectacular numbers? No, though there were some runs that made you gasp as Murray showed off a power and speed combination that’s been absent in the Cowboys’ run game since early October. But Murray was, above all else, effective. And the result was a balanced game plan of 33 run plays, 29 passes and an offense that moved the ball effectively all night. Per Jean-Jacques Taylor:
Murray’s impact is bigger than any stat you want to discuss after the Dallas Cowboys beat the Philadelphia Eagles, 38-33, on Sunday night. He gives the Cowboys a toughness and a physical mentality they lack when he’s not in the lineup. Murray is the reason Tony Romo had his best game, passing for 303 yards with three touchdowns and no interceptions. Murray is the reason Jason Garrett didn’t abandon the run with the Cowboys trailing by a touchdown at halftime like he usually does. He’s the reason offensive line coach Bill Callahan was laughing and joking with all of his starters after the game. And he’s the reason why more than one lineman talked about Garrett’s commitment to running the ball the entire game.
Murray is back, then, just in time. No, not because the Cowboys needed to beat the Eagles. They could have found a way to beat the Eagles if they’d held a contest last week and let a rotating group of fans play running back. The Eagles haven’t won since there were leaves on the trees and Mitt Romney still thought he had a chance. But assuming Murray and his foot came through Sunday night’s game healthy, his return has come at precisely the right time for the Cowboys.
They face tough, physical defensive fronts the next two weeks, first in Cincinnati and then at home against the Steelers. These are games it will be difficult for the Cowboys to win, games in which they will justifiably be underdogs. But if they’re to have a chance against either team, they will have to be physical up front. With their offensive line the way it is, that’s not easy to do. But Murray brings an element that helps them overcome the line problems. The same way Romo finds a way to make plays with his feet when protection breaks down, Murray is the kind of runner who likes to overcome difficulty. He’s tough. He absorbs contact. He’s used to having to try and make something out of nothing, and he digs it. The “mentality” about which Jacques is writing is not present when the back is Jones or Phillip Tanner or Lance Dunbar. There aren’t many backs who bring it. Murray is one, and the Cowboys’ offense works much better when he’s in it.
The shame for the Cowboys, and for Murray, is that the young man is bound to get injured again. His history and the way he runs — toward contact, lowering his head, etc. — practically insist on it. The Cowboys look at Murray as one of their long-term building blocks, but the likelihood is that they’ll always be dealing with some physical situation that either limits him or keeps him off the field. For now, though, as they look ahead to their final four games and a still-breathing chance at making this year’s postseason, they should be thankful he’s back on the field and enjoy it while it lasts. Because as great as Romo and Dez Bryant and Jason Witten and Miles Austin are, the Cowboys are simply a different offense with Murray.
Source: espn