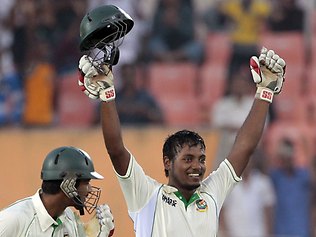 It was a very disappointing performance for Bangladesh whose 8 wickets had fallen at 193. The pitch was a flat, low and slow one. West Indies had bulldozed through almost entire batting line up of their opponent. Then came debutant Abul Hasan who did something even he had never imagined. He became only the second Test debutant to make a hundred at No. 10 in 2059 previous Tests dating back to 1877. The feat was previously achieved by Australian Reggie Duff over a century ago in 1902. He had record unbroken ninth-wicket stand of 172 with Mahmudullah, who is himself on 72. He is only the fourth No 10 batsman to score a century.The last player to do so was South Africa’s Pat Symcox.
The first four balls of his innings were duck as he was beaten by Fidel Edwards. Later, he played by sensible defence and hit audacious boundaries.
His performance had left West Indies stunned. They were unable to regroup. Every delivery and every bowler got runs. The windies were forced to set defensive fields. His performance was largely chanceless although he was dropped on 42, at forward short leg off Veerasammy Permaul. He made three attempts to catch but couldnt.
Mahmudullah’s contribution was also worth mentioning. He let Abul go about his business and batted along without fuss. He didn’t try to match Abul for brilliant stroke play.
The ninth-wicket partnership was already Bangladesh’s highest, and also the fourth-highest ever in Tests. After the struggles of the specialist batsmen, even the staunchest Bangladesh supporters who had come to watch the match in Khulna couldnt have hoped for a better first day’s play.
Edwards who was moving the old ball at pace, was in business in all the three first sessions but no one had reckoned for Abul.