Apple has announced the its new ultra slim iMac that will be available for sale on Friday, Nov. 30. The announcement has been made after Apple first announced its new all in one desktop PC’s which new storage feature called Fusion Drive.
The iMacs will be available in two screen sizes 21.5 and 27 inches. Only the delivery of smaller size 21.5 inch iMac will start from Nov. 30 where as Apple will only take orders for larger size iMac and shipping will start in end of December. 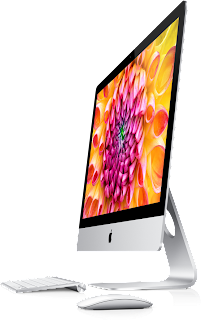 The smaller screen iMac starts at $1,299 with a 2.7GHz quad-core Intel Core i5 processor andh Nvidia Ge-Force GT 640M graphics. Another option is 2.9GHz Core i5 and GT 650M graphics at a price of $1,499.
One of the main features of new iMacs is its ultra slim display of just 0.2 inch (5mm) deep. Apple has designed the new iMac by eliminating one of the layers in the screen to make it flatten. The iMac production methods have also been changed by geting rid of components and ditching optical drives.
The new iMacs has 8GB of RAM and 1TB of hard disk. Buyers can also opt for Fusion Drive technology. Fusion Drive is an intelligent drive which will manage users most accessed files and applications by putting them in the SSD, make them to run faster.
For a 27-inch iMac, you can get a 2.9GHz quad-core Core i5 with Nvidia GeForce GTX 660M graphics for $1,799 or a 3.2GHz Core i5 with GTX 675MX graphics for $1,999. Those appear to be the only configurations available.