Skip to content
Apple exec Richard Williamson, has been fired by Apple.The executive is blamed for Apple’s application for maps developed for IOS 6 .Bloomberg News reports.Williamson’s in many of online profiles like LinkedIn is still an Apple employee.

Richard Williamson, who oversaw the mapping software team was fired by Senior VP Eddy Cue who become the part of Apple’s management after last month shakeup at top level. He is seeking advice of digital maps provider TomTom NV to fix problems related to landmark and navigation data in the IOS 6 maps for Apple. 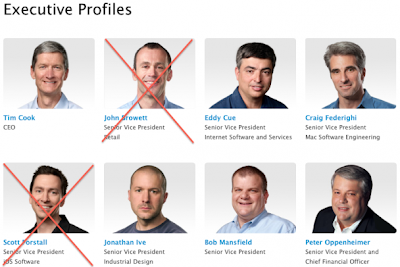 Richard Williamson was fired after Scott Forstall, another high profile Apple executive who was also blamed with iOS 6 map mess.

Richard Williamson started his carrier at Apple as a senior software engineer in 2001 and tookover as the director of iOS software team a few years later. Williamson has also previously served at NeXT founded by Apple’s former CEO Steve Jobin in late 80s  and 90s.

Apple team has been working to fix the problems in the maps and elimanating the problems one by one with eliminating the most glaring one first. The new satellite imagery of U.K. has been incorporated to improve the labels and popular landmarks.

Tim Cook’s however apologized from Apple side and asked consumers to use third-party mapping applications available on the iOS App Store.

Tim cook in his written apology said that

At Apple, we strive to make world-class products that deliver the best experience possible to our customers. With the launch of our new Maps last week, we fell short on this commitment. We are extremely sorry for the frustration this has caused our customers and we are doing everything we can to make Maps better.

We launched Maps initially with the first version of iOS. As time progressed, we wanted to provide our customers with even better Maps including features such as turn-by-turn directions, voice integration, Flyover and vector-based maps. In order to do this, we had to create a new version of Maps from the ground up.

There are already more than 100 million iOS devices using the new Apple Maps, with more and more joining us every day. In just over a week, iOS users with the new Maps have already searched for nearly half a billion locations. The more our customers use our Maps the better it will get and we greatly appreciate all of the feedback we have received from you.

While we’re improving Maps, you can try alternatives by downloading map apps from the App Store like Bing, MapQuest and Waze, or use Google or Nokia maps by going to their websites and creating an icon on your home screen to their web app.

Everything we do at Apple is aimed at making our products the best in the world. We know that you expect that from us, and we will keep working non-stop until Maps lives up to the same incredibly high standard.