Another blow to Intel corporation is in hands by a new partnership between Tech Giants Advanced Micro Devices, Inc with ARM for a SeaMicro server (based on upcoming 64-bit processor). The conference is scheduled on Monday 29th October in San Francisco. So now AMD and ARM share a common enemy Intel.
ARM (Advanced RISC Machine) a British company is the world’s leading supplier of 32-bit CPU cores for cell-phone processors, consumer electronics, and embedded systems. 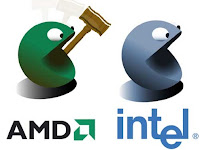 AMD already has partnership with ARM. It partnered with ARM earlier this year to use its TrustZone security technology in AMD processors, but it hasn’t announced any plans yet to build an ARM-based CPU. This move is likely to help AMD’s efforts to expand its reach into mobile devices market.

Appearance from Advanced Micro Devices (AMD) executive Rory Read is expected at the ocassion. ARM spokesman also confirmed Thursday that its CEO Warren East will be there as a “special guest.It is expected that an ARM-based SeaMicro server would be in the market in 2014.