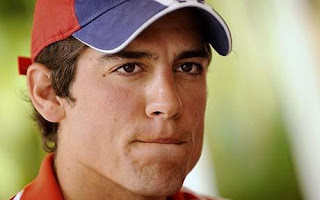 Alastair is 27y 347d old today. Currently he is oldest player on the field. Sachin Tendulkar was 28y 193days old when he reached the landmark.

In response to India’s first innings of 316 runs, Alistair Cook and company displayed a rock solid performance with bat and left Indian bowlers flat as the pitch itself was. Alistair Cook scored an unbeaten 136 runs and became the highest test century maker by an English batsman. This was Cook’s 23rd test century. He has also become the youngest batsman to get past 7000 test runs. As a captain, Cook now has scored five centuries in five tests he has played as captain. England is 216 at the loss of one wicket.
Cook was dropped at 17 by Pujara on first slip. After that, he played with full authority and didn’t give even a half chance. The outfield helped the batsmen as well as it was lightning fast. Cook played both spinners and fast bowlers with great confidence and taught Indians how to play on batting friendly wickets where they failed to perform extra ordinarily. He had an opening partnership of 165 runs with Compton.
Starting the day’s play, Zaheer Khan and Ishant Sharma were unable to give their skipper a company. With No 11 Prgayan Ojha, Dhoni added some runs to score his fifty. However on a flat, pure batting track, India scored at least 100 runs short. If runs continue to come for England on the third day, the scenario may get difficult for India to win the series. The scoreboard so far is as:
England 216 for 1 (Cook 136*, Compton 57) trail India 316 (Tendulkar 76, Gambhir 60, Dhoni 52) by 100 runs